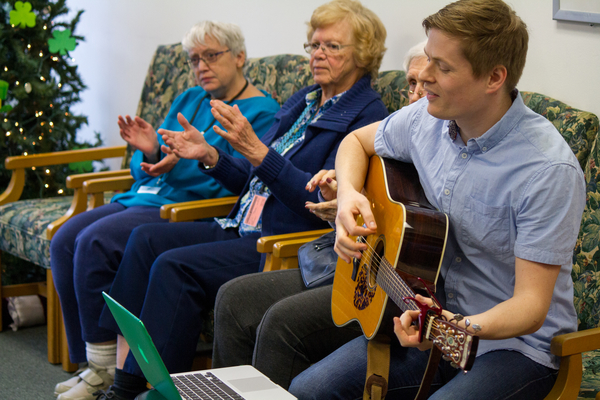 By Mark Demko, Senior Director of Communications The sounds of John, Paul, George and Ringo fill the air as voices join together to sing the Fab Four’s “Ob-La-Di, Ob-La-Da.” As the music permeates every corner of the room, the spirit of the chorus rises, bringing a palpable energy to the space. While singing the music of The Beatles might be something one expects from a high school group or a local rock band, the members of this ensemble are slightly more mature, with participants ranging in age from their late ’50s to well over 90. The engaging sing-along is all part of the Bethlehem YWCA Adult Day Services Center’s “Creative Aging Program,” designed to engage older adults and keep them socially active in the community. Launched in February, the Creative Aging Program got its start when Center Director Sabrina Keim contacted ArtsQuest because she knew one of the nonprofit’s primary focuses is bringing the community together though the arts. The partners then decided to start two Creative Aging programs: one at the Services Center and another at the Fred B. Rooney Building, a low-income housing facility in south Bethlehem. Among the 40-plus participants in the two weekly programs have been area residents battling dementia and Down Syndrome, as well as physical disabilities. 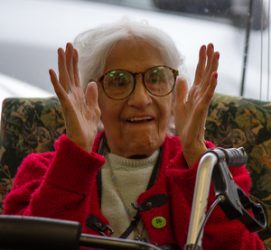 “The most impactful thing that has come out of the Creative Aging programming here has been everyone’s connections with one another,” Keim says. “When you have memory loss, sometimes language is lost and sometimes those human connections are lost, and I really feel that our program has helped the participants develop connections among one another; that it’s helped the team with family members and caregivers; and that it’s really sparked socialization, communication and laughter, which we don’t always hear throughout the day.” As people continue to live longer, communities throughout the nation are discovering the benefits of developing artistic programming that helps meet the needs of this sometimes under-served segment of the population. The National Center for Creative Aging says engaging arts programs help seniors remain dynamic members of society and provide younger generations with positive role models, thereby encouraging a strong sense of meaning and strengthening communities. ArtsQuest Director of Education & Outreach Lisa Harms says the Creative Aging Program is a programming element that ArtsQuest had identified as part of its strategic goal of presenting new opportunities for people to access the arts. “The senior population in particular is one that we feel can really benefit from healthy aging programs like this one,” Harms says. “The more that we can introduce art into their daily lives and improve their quality of life, the greater impact we can all have on our community.” In an effort to develop a multi-disciplinary program that really engages seniors on many levels, ArtsQuest looked to Jameson Baxter, who earned his Bachelor’s Degree in theater from Concordia University in Saint Paul, Minn., to lead the program. Part musician and artist, part storyteller and actor, Baxter has worked with senior populations at several locations in Minnesota and the Lehigh Valley, including Phoebe Ministries. In one of Phoebe’s programs, “Spirit Alive,” the focus was on presenting an interactive, multi-sensory program designed specifically for people with dementia. “Jameson is able to not only customize the program content for this population, he’s also able to customize the class to the abilities that the group is bringing with it as well,” Harms says. “Jameson is able to modify the class content on any given day. He can roll with almost any situation, and he’s able to provide very powerful programming in a very adaptable and flexible way.” Visit one of the Creative Aging classes at the Day Services Center and you may see the participants banging on a drum kit, blowing a few notes on a saxophone or even rolling tennis balls dipped in paint on a large canvas to create a work of art. The unique use of tennis balls as a paintbrush, which resulted in the creation of a banner now on display at the Services Center, allowed every resident to participate in the activity, even those who were confined to a wheelchair. Baxter says creativity and self-expression are huge elements of a strong Creative Aging Program. “I think it helps them in a huge way because a lot of times what I see happen is people don’t have the space to be creative,” he says. “With this program, it gives us a space to say, ‘Okay, you can be yourself, you can be creative and it’s going to be okay. There’s no judgment and we’re going to have fun.’ “I think there’s that creative side in all of us, that side that wants to come out and play and wants to be expressive. A lot of times people are just afraid that others are going to laugh at them, but here they know it’s just a safe place to express themselves and have fun.” As the music winds down and the YWCA residents prepare to go about the rest of their day, it’s obvious the positive impact the activities are having on participants. Keim, a huge proponent of Creative Aging programming, is a bit sad since she knows that funding for the program is running out. Then, just as the YWCA’s Creative Aging initiative nears its end, she gets word that a donor has stepped up to help extend the life of the program for at least a few more weeks. The partnership with ArtsQuest has touched her residents’ lives, and she hopes that in the future even more older adults can experience the benefits of Creative Aging programming. “We’d love to see more programs like this pop up in the Lehigh Valley,” Keim says. “Our seniors are very dear to us. They’re 20 percent of our community and we would love to see this in nursing homes and senior centers across the area. I hope that that this catches on soon.”

As a nonprofit, ArtsQuest raises money to help support its many outreach programs for the community, and our ArtsQuest Members play a leading role in this. Please become a member today and assist us in presenting unique programs like Creative Aging - fill out the enclosed membership envelope or join today at www.artsquest.org/support/membership/.