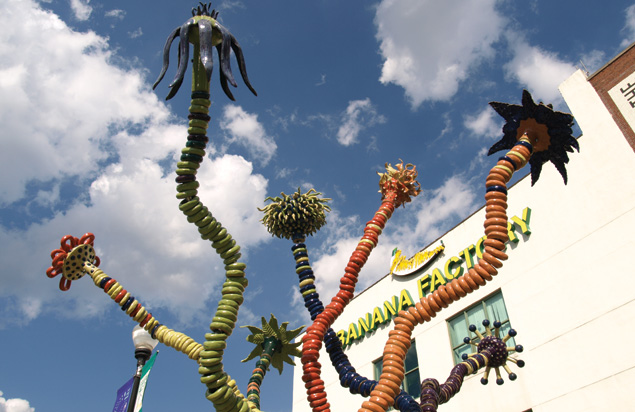 Neighborhood Assistance Program Grant Focuses on Addressing Blight in the SouthSide Community Bethlehem’s SouthSide community, artists and area youth education programs will be the beneficiaries of a new $150,000 Neighborhood Assistance Program (NAP) grant awarded to ArtsQuest by the Commonwealth of Pennsylvania through the Department of Community & Economic Development. Earlier today, Gov. Tom Wolf announced that ArtsQuest will receive a $150,000 Special Projects Program (SPP) grant to be used toward the redevelopment and expansion of the current Banana Factory Arts Center to help eliminate and address blight in the three census tracts neighboring the arts center.  The nonprofit arts organization has proposed building an 80,000-square-foot community cultural center in the lot adjacent to the Banana Factory. The three census tracts adjacent to the Banana Factory include 25 of the 47 blighted properties identified by the City of Bethlehem and stakeholders in the Bethlehem Blight Betterment Initiative Study. Together, they comprise the largest concentration of blighted properties in the city. Construction of the ArtsQuest Community Cultural Center will have a variety of positive impacts on the SouthSide neighborhood and its residents. U.S. Census Bureau statistics show that more than 60 percent of the people living in the neighborhood have a high school education or less. Current projections show that up to 225 construction jobs will be created during construction of the community cultural center, with new full- and part-time jobs also added once the building opens.  Increasing economic opportunity is a key strategy to reducing blight and stabilizing the community. “This Neighborhood Assistance Program SPP grant is a significant step in helping us with the development of our new community cultural center, which will benefit students, residents and artists of Bethlehem’s SouthSide in numerous ways,” says ArtsQuest President & CEO Kassie Hilgert. “Twenty years ago, we developed the Banana Factory Arts Center out of several old buildings on the city’s SouthSide in order to bring innovative arts and education programming to area residents, and this grant will help us reimagine neighborhood stabilization, community enrichment and economic development in the city. We greatly appreciate the Commonwealth of Pennsylvania’s support of this key neighborhood development project and we thank State Senators Pat Browne and Lisa Boscola, as well as State Representatives Steve Samuelson and Jeanne McNeill, for their leadership roles in helping secure this funding for us and our region.” ArtsQuest’s proposed community cultural center will allow the nonprofit to greatly expand its arts and education programming for the community while serving as an anchor for the growing SouthSide Arts District. Among the new programming to be offered at the building will be the region’s first art-based Pre-K Program, artist-focused 2- and 3-D MakerSpaces and a 125-seat Comedy/Black Box Theater that will be used for educational classes, as well as performances by area comedians, providing opportunities for dozens of local and regional artists to support their livelihoods. The community cultural center will also increase the number of artist’s studios available for rent by the region’s artists. Additional details on the new community cultural center will be announced in 2019. For more information on ArtsQuest, visit www.artsquest.org. NAP provides tax credits to businesses that donate capital to support projects that address neighborhood and community problems – particularly in low-income areas that need it most. NAP can be used for projects in categories including affordable housing, community services, crime prevention, education, job training, charitable food, blight, special population issues, veteran’s initiatives, and long-term community revitalization. NAP has five main components: the Neighborhood Assistance Program (NAP), Special Program Priorities (SPP), the Neighborhood Partnership Program (NPP), the Charitable Food Program (CFP), and the Enterprise Zone Program (EZP).