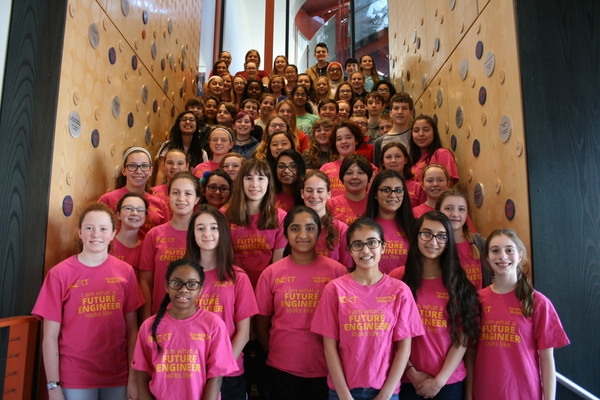 ArtsQuest has Big Dreams for Education

By Emily Cummins, Public Relations Coordinator When it comes to reaching students ArtsQuest Director of Education and Outreach Lisa Harms is ready to dream big. In February, ArtsQuest and the Frank Banko Alehouse Cinemas hosted 12 schools and more than 1,000 students for eight screenings of the educational film “Dream Big: Engineering Our World,” which aims to inspire the great engineering minds of tomorrow. 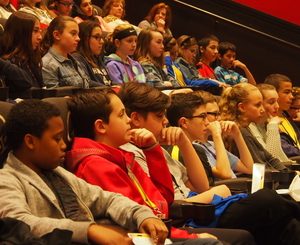 Presented by the Lehigh Valley Section of The American Society of Civil Engineers (LVASCE), each screening was followed by a Q&A with a panelist of engineers that ranged from civil to geological and mechanical engineers as well as retirees and students. As a new program for ArtsQuest, Harms says the opportunity to host the screenings happened organically after LVASCE held its annual dinner at SteelStacks. “They looked to us first for hospitality opportunities, and once the introduction was made we began talking about how they had been reaching out to schools on their own and weren’t having a lot of luck,” Harms says. “We used our relationships to connect with schools and we were able to get a record number of districts involved, including schools we had not partnered with before.” Through the partnership with ArtsQuest, LVASCE President Michael Derr says his team was able to get lesson plans out to STEM educators who discussed materials in the classroom before they arrived for the film. “We were able to present engineering in a way that goes beyond the stereotype of a math and science driven desk job and showcase how engineering impacts people’s lives,” Derr says. “One of the things I think the film does a great job at is showing the different types of engineering jobs that exist, and how being an engineer really gives you a humanitarian role in our society. It also showcases diversity in engineering, which we were happy to see resonated with the students. A group of all female students and members of an afterschool STEM club from Orefield Middle School made a special trip to ArtsQuest for “Dream Big” after they returned from the annual Society of Women Engineers Conference in Washington D.C. “I kind of cried in the middle of the movie,” says Valeria Quintanilla, a seventh grader from Orefield Middle School. “Being an engineer is not only about yourself, but what you can do to help people in the world. The engineers in the movie were really inspirational.” 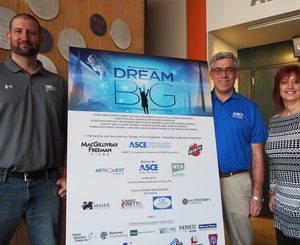 “I like the idea that as an engineer you have the ability to make a global impact, and the fact that this movie, but also the people here on the panel, are promoting women in engineering is awesome. It gives me a lot of hope for the future,” says Prathysha Kothare, a seventh grader from Orefield Middle School. To event organizer Stephen Ressler, professor emeritus at the U.S. Military Academy at West Point, the feedback from students and their teachers “could not have been better.” “Right now the prospect for the future is so amazing, and it was phenomenal to partner with ArtsQuest and to reach these kids through all of their support,” Ressler says. “I thought I might be able to get some work done while the film was screening, but it never happened. I sat through it eight times and learned something new each time; it’s just so compelling.” Harms herself was even impacted by the film. “When you think of an engineer you might not think about people who are building bridges in third world countries, individuals who are harnessing solar energy or people studying the impact of earthquakes and developing technology to stabilize people’s homes,” she says. With the success of “Dream Big,” Harms and Derr say they are excited to look for other ways to partner on other films and STEM-based events. “What we need to think more about now, is how do we make use of our other resources like our cinemas,” Harms says. “We see ArtsQuest as an extension of the classroom, so how do we engage more with students who may come back to our facilities with their families?” Looking for opportunities to create even more educational initiatives for the region, Harms has been collaborating with various ArtsQuest departments like the visual and performing arts teams to come up with innovative opportunities such as Camp Musikfest, which is new for summer 2017. 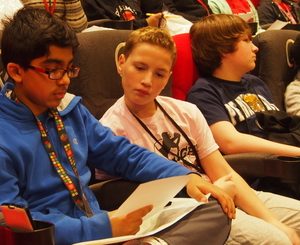 “This year for the first time we are piloting a new summer camp in addition to our successful visual arts camps during Musikfest that will give kids the opportunity to fully experience Musikfest and learn what goes into creating and running the festival,” Harms says. “What we wanted to do is harness the impact of the hundreds of performers from all over the world who come to the Lehigh Valley just for Musikfest and create a hands-on, interactive experience for kids.” Each day of camp, August 7-11, will introduce boys and girls ages 9-13 to a different type of performer including a vocalist, brass band, street performers, comedians, a filmmaker and a visual artist. “All of this is built on the foundation of our education programs. Black Tie Brass Band performed at Musikfest last year and as music educators they were blown away with Bethlehem, the festival and our mission at ArtsQuest. After their performance they asked to come back to work with students in the Bethlehem school district. So when they perform at Levitt Pavilion June 1 they will do an artist in residence program with local elementary and middle school students, and in August they’ll return for Camp Musikfest,” Harms says. “What we’d like to see is how we can take these successful models, from our existing afterschool enrichment programs like B-Smart or our visiting and teaching artists, and reach out to a broader network of schools and students in the Lehigh Valley and tap into the multi-disciplinary content that ArtsQuest offers. We want to explore how we can integrate the arts into school curriculums and meet their needs.”