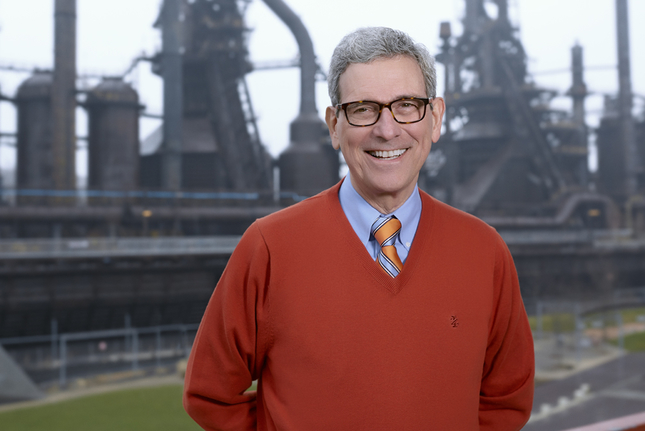 Jeffrey Parks, founder and former President of Musikfest and ArtsQuest, will release his first book, “Stronger Than Steel: Forging a Rust Belt Renaissance,” June 18. The book, which talks about the transformation of Bethlehem since the closing of its primary employer and the role the arts played in this transformation, retails for $19.50 for paperback or $9.99 for Kindle and Nook ebooks. It can be purchased at the ArtsQuest Center at SteelStacks, which will offer signed copies, as well as other local book stores and online retailers like www.amazon.com and www.barnesandnoble.com. On June 22, 5-6:30 p.m., Parks will also do a free reading and book signing in the Blast Furnace Room of the ArtsQuest Center, 101 Founders Way, Bethlehem. After more than three decades of developing innovative arts strategies to support the transition of Bethlehem from a steel industry town to a dynamic, information age community, Parks looks to share some of the stories, tactics and strategies that worked well in Bethlehem in the 1980s through the early 21st century. He uses census figures to highlight how the city, which lost thousands of jobs when its largest employer, Bethlehem Steel, started eliminating positions in the 1970s and ’80s, today has the highest median household income and the lowest poverty rate among Pennsylvania cities and continues to attract more and more young educated residents. He attributes much of the success of the community to the relevant, accessible arts and cultural programs offered in the city, which is home to only 75,000 residents. Written in the first person, Parks weaves the tale of many of the prominent figures in Bethlehem throughout its history and how their legacies created the inclusive, culturally vibrant city it is today. The story chronicles the pain of Bethlehem as it, like most cities that hosted industries, suffered the twin catastrophes of deindustrialization and suburbanization, primarily through the closing of its main industry, The Bethlehem Steel, in the 1980s and early ’90s. In the second part of the book, Parks describes how the Lehigh Valley came together as a region for economic development, tourism, transportation and planning, as well as how Bethlehem embraced regionalization. From his firsthand experience he shares how and why Musikfest, today the nation’s largest free admission music festival, was created; how it grew to become a signature event for the city; and how the nonprofit festival organization ArtsQuest (then known as Bethlehem Musikfest Association) expanded to add the Christkindlmarkt holiday marketplace and the Banana Factory arts center, lacing the story with several humorous anecdotes from the history of what has become the largest arts organization in the region. The book concludes with chapters devoted to the amazing story of the redevelopment of the Bethlehem Steel plant, which was the largest brownfield project in the United States in 2001. Mixing interviews with key players in the plant redevelopment with his personal role, Parks shines a light on the behind-the-scenes struggles as 1,800 acres of industrial land became three very successful enterprises: an industrial park, a destination casino and a major regional arts and culture campus known as SteelStacks. Listed in 2004 on the National Trust for Historic Preservation's annual list of 11 Most Endangered Historic Places, today the former steel mill is home to the 10-acre SteelStacks campus, which draws more than one million guests from 45 states annually for concerts, festivals, events and arts programming. Stronger than Steel has received praises from a host of national arts and urban development leaders including: Pam Breaux, President and CEO of the National Assembly of State Arts Agencies Tom Murphy, former Mayor of Pittsburgh and Senior Resident Fellow at the Urban Land Institute Jamie Bennett, Executive Director of ArtPlace America Mario Garcia Durham, President and CEO of the Association of Performing Arts Professionals. Parks, a Bethlehem native, is an attorney who resides in Historic Bethlehem with his wife Susan and dog Folly. He is currently the Chair of the Pennsylvania Council on the Arts. Stronger than Steel (paperback, 349 pages) is published by Bethlehem-based Rocky Rapids Press, LLC in paperback and eBook formats. For more information see www.strongerthansteel.info.